<< Back to all articles 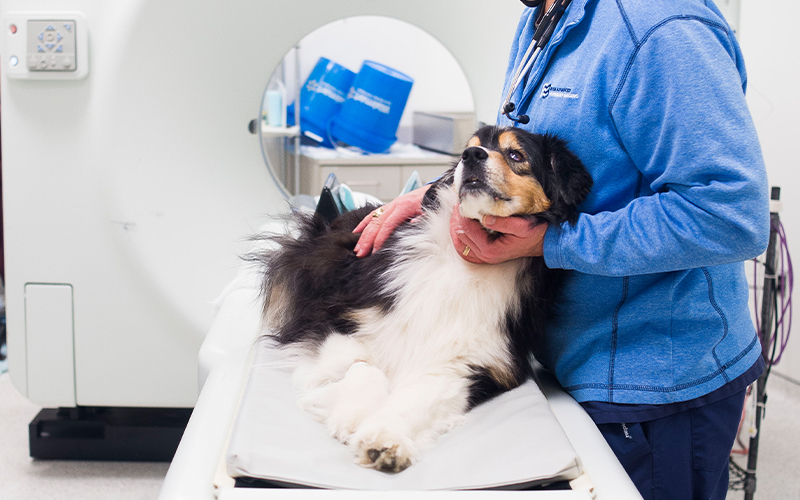 What is idiopathic epilepsy?

Idiopathic epilepsy (IE) is the condition of repeated seizures over the course of a pet’s life without an identified cause despite extensive testing (such as bloodwork, MRI, spinal fluid sampling, etc.) Idiopathic epilepsy is one of the most common chronic neurologic problems affecting pets. IE occurs in about 75% of dogs with seizures but only about 33% of cats with seizures.

How do you identify a seizure?

Every pet’s seizure can look a little different. However some actions, such as twitching or movement while dreaming, can be confused for seizure activity.

Before or after a seizure, a pet may express certain behavioral changes such as:

During a seizure, a pet may:

In between seizures, a dog or cat with IE should be completely normal. If you are unsure if your pet had a seizure, taking a video of the abnormal event and showing it to your veterinary neurologist can help diagnose and treat your pet.

How do we diagnose idiopathic epilepsy in dogs and cats?

To diagnose the cause of seizures, a Veterinary Neurologist will perform physical and neurological examinations along with standard blood work. A complete blood count (CBC), full chemistry panel with electrolytes, bile acid profile, and urine test (urinalysis) are typically recommended.

More definitive testing, such as an MRI of the brain and a collection of spinal fluid (spinal tap), may be recommended if:

Abnormalities in either an MRI or spinal fluid evaluation suggest there is an underlying disorder affecting the nervous system, which may be causing the seizure.

Idiopathic epilepsy is a diagnosis of exclusion. A veterinarian must rule out all other causes of seizures prior to diagnosing a dog or cat with epilepsy.

Another test that is becoming more commonly performed is an electroencephalogram (EEG). Performed by a Veterinary Neurologist, an EEG involves placing electrodes on the head of an animal to monitor for abnormal brain activity. A Veterinary Neurologist may recommend this test to help confirm a diagnosis of epilepsy in a dog or cat.

How is idiopathic epilepsy treated?

Unfortunately, there is no cure for idiopathic epilepsy. Veterinarians and Veterinary Neurologists will use anticonvulsant (anti-seizure) medications to help decrease the frequency and severity of seizures. Treatment may require several trials to find a medication that works best for a pet, but once found, it may significantly reduce the frequency of seizures. If a dog or cat has had two or more seizures within a 6 month period or seizures lasting longer than five minutes, medication is probably required.

A wide variety of medications are used to control seizures. The most common medications used include:

Please note, with each medication, there are side effects, and these should be discussed with the veterinarian or Veterinary Neurologist overseeing a pet’s treatment. The most common side effects of all anticonvulsant medications are sedation and incoordination. With time, most pets will adjust to their medication and the side effects will lessen or resolve.

Proper monitoring of anticonvulsant medication is very important when managing a dog or cat with epilepsy. Monitoring includes rechecking bloodwork such as a CBC, chemistry panel, and anticonvulsant drug levels. These tests allow a veterinarian or Veterinary Neurologist to make changes to dosing in order to help maximize seizure control and minimize side effects. Owners of a pet with epilepsy should keep track of how often their dog or cat has a seizure. By sharing this seizure log, the veterinarian or Veterinary Neurologist can help owners better manage their pet’s seizures. A lack of adequate monitoring is the most common reason for treatment failure in epileptic dogs.

What is the prognosis for idiopathic epilepsy in dogs and cats?

Approximately 75% of dogs will require at least one medication in order to have a significant reduction in their seizure activity. Even with the appropriate medication, most dogs will still experience a few seizures. Only about 15% of dogs achieve seizure freedom (lack of seizures) with medication.

Cats have similar response rates in that 70-90% will have moderate to good control with medications. Up to 50% of cats can remain seizure free for years after starting anticonvulsant therapy.

A small group of dogs and cats may be diagnosed as “pharmacoresistant” epileptics. This means that they will receive 2 or more anticonvulsant medications and still have poor seizure control.

How does an owner care for a dog or cat with idiopathic epilepsy?

Once a dog or cat has been diagnosed with idiopathic epilepsy and started on anticonvulsant therapy, their medications must be given as prescribed. If a family is concerned about the frequency and severity of their dog or cat’s seizures despite medication, good communication with their veterinarian or veterinary neurologist is key. Owners should not make any medication adjustments without the knowledge and supervision of a veterinarian or Veterinary Neurologist.

Most dogs and cats with idiopathic epilepsy can live relatively normal lives. However, if seizures are severe and difficult to control, epilepsy can shorten the normal lifespan of a pet.

Veterinary Neurologists recommend that a dog or cat be spayed or neutered once they have reached an appropriate age as some forms of epilepsy are genetic and intact pets may be at risk for more severe seizures. Dogs with epilepsy should not be allowed to swim as a seizure while swimming could result in a fatal drowning.

What is a seizure emergency?

A pet should be evaluated for seizures if they have:

If your dog or cat is experiencing a seizure emergency, immediately notify your primary veterinarian or veterinary neurologist as your pet may require urgent care.

Listen to an episode about seizures in dogs from Morris Animal Foundation's Fresh Scoop Podcast!